Plant Modernisation in the Philippines

The Agua Grande Mini Hydro Project was supplied and commissioned by Gilkes in 1981 as part of a batch of 34 units supplied to the Philippine Government under a UK aid grant. Five turbine-generator units each rated at 910 KW were originally installed in the Agua Grande Power Station.Reliable operation of the plant is critical for the local grid supply and a decline in the availability of the plant was starting to cause problems.

Gilkes, through Bosung Greenpower Co. were invited to inspect the plant with a view to upgrading the original units to bring them back to as new condition and to automate the plant operation after 35 years of manual operation.

Following a Gilkes inspection visit and following a review of the condition of the plant with the customer it was decided to only upgrade 2 of the machines. The plant was commissioned into its new state whilst local network upgrades were also ongoing. Gilkes were able to navigate these constraints and provide a successfully commissioned, upgraded plant. 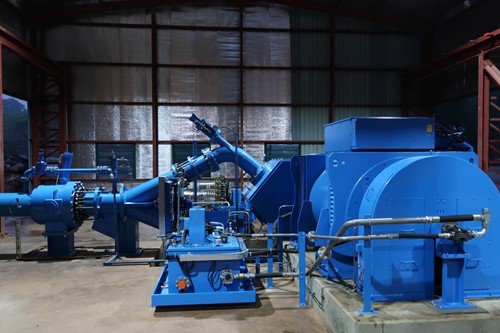 The main benefits from the upgrade were:

• Increased plant availability through optimised automation of the existing manual plant.
• More efficient use of the available water by installing a head level control system.
• Increased annual generation and revenue.
• Increase in monitoring of critical equipment parameters – allowing a predictive maintenance regime to be put in place.
• Flexibility of plant operation to suit any changes to the plant operating requirements.
• Short payback by retaining existing infrastructure – equipment tailored to suit existing civil layout to minimise cost.
• Reduction in number of operators required to operate and maintain the plant allowing staff to be redeployed.
• Re-establishing original lifetime of the plant.

FURTHER MODERNISATION 2020
After the first round of modernisation had been carried out in 2017 the plant is now able to both export power to the grid and to support the power station operating loads as a small island network which may be black-started by either unit.

A further requirement has been identified by the plant owner to provide support for a larger island network to provide power to a single private consumer and to local villages in the event of a grid outage. As a result of the upgrade to state of the art electronic plant control it is a relatively easy task to reconfigure the plant to support this new island network in the event of one of the frequent grid outages experienced in this region.

This second phase of modernisation is planned for early 2020 after which each turbine will be capable of being operated in isolation from the main grid network providing essential power to the surrounding area.